A blog of tenant questions and TLP instructors’ answers. 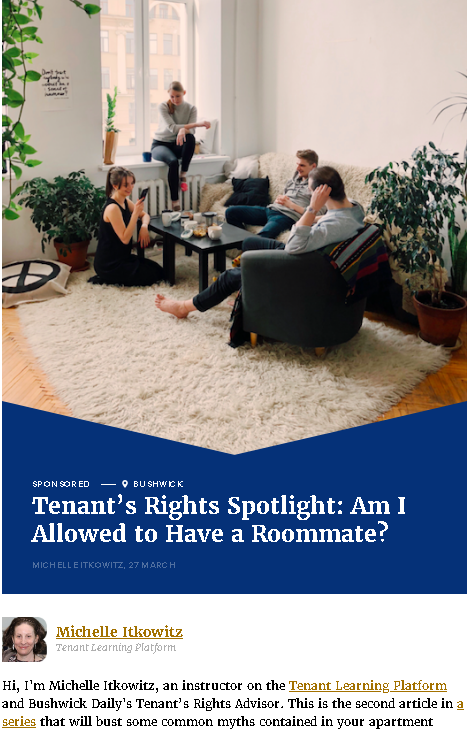 Am I Allowed To Have A Roommate?

A shorter version of this Article originally appeared in Bushwick Daily, where Michelle Itkowitz is the “Tenant’s Rights Advisor”.

Hi, I’m Michelle Itkowitz, an instructor on the Tenant Learning Platform and Bushwick Daily’s Tenant’s Rights Advisor. This is the second article in a series that will bust some common myths contained in your apartment lease. As a New York City tenant, you have many rights. And no matter what your lease says, those rights cannot be taken away.

How many people these days can afford to pay rent for an apartment all by themselves, especially in New York City? For that matter, how many people want to live alone? The best roommates are down for a night of wine and Netflix, and they actually clean the bathroom. They’re unicorns, but they’re out there.

If you read the fine print on your apartment lease, however, you might think that you were violating your lease by taking in a roommate. Let’s take a closer look at these lease clauses and busts the myths built into them.

First, let us look at some actual lease clauses, which prohibit you from having a roommate. Here is one in a typical, old-fashioned lease:

“The apartment may be occupied only by Renter named in this lease.”

Here’s another clause, this one was pulled from a more modern lease:

If you read the first lease clause, you might believe that you have no right to have your immediate family join you in the apartment, much less to have a roommate. If you read the second clause, you are left wondering what the heck is “Real Property Law § 235(f).”

So, let us begin by looking at Real Property Law § 235(f), otherwise known as the “Roommate Law.” The Roommate Law tells us that any residential lease entered into by one tenant shall be construed to permit occupancy by four different categories of humans:

A landlord rents to Mr. Smith, the tenant (Category 1). Mr. Smith moves his immediate family in, Mrs. Smith and their two children (Category 2). Then Mr. Smith decides that they need a roommate in order to make ends meet. So, Mr. Smith gets a roommate, Ms. Jones (Category 3). Ms. Jones has two dependent children (Category 4). Now you have three adults and four children living in an apartment, even though there is only one tenant on the lease.

See 1890 Adam Clayton Powell LLC v. Penant, 52 Misc.3d 76 (App. T. 1st  Dep’t 2016), where eviction allowed by the appellate court where, “three unrelated roommates resided with tenant in the subject four bedroom apartment, in violation of the lease provision limiting occupancy to ‘tenant or tenants named above and by the immediate family of the tenant or tenants and by occupants as defined in and only in accordance with Real Property Law § 235–f’.”

The Roommate Law goes on to tell us that any residential lease entered into by two or more tenants shall work the same way, provided that the total number of tenants and occupants, excluding occupants’ dependent children, does not exceed the number of tenants specified in the current lease, and that at least one tenant or tenant’s spouse occupies the premises as their primary residence.

So How Many People Can Be Crammed into An Apartment?

Pursuant to New York City’s Administrative Code Section 27-2075, there must be at least 80 square feet per person in an apartment. This goes for Multiple Dwellings and one- and two-family houses. Keep in mind that 80 square feet is not a lot. When measuring the available area, for purposes of this statute, the kitchen is counted, but bathrooms are excluded.

For every two people who may lawfully reside in an apartment, one child under four may also reside there. In any case where the birth of a child or its attainment of the age of four causes the number of persons or children to exceed the maximum occupancy permitted, such excess occupancy shall be permissible until one year after such event.

There are a few other caveats for a tenant under the Roommate Law.

A roommate does not acquire any right to continued occupancy, in the event that the tenant vacates the premises.

Nothing in the Roommate Law shall be construed as invalidating or impairing the operation of, or the right of a landlord to restrict occupancy in order to comply with federal, state or local laws, regulations, ordinances or codes.

There is a legal difference between a “roommate” and a “guest” and a “subtenant.” And because the Roommate Law only applies to roommates, you must be careful to know the difference.

A roommate is a person, other than a tenant or a member of a tenant’s immediate family, occupying a premises with the consent of the tenant or tenants. A roommate is a long-term co-occupant of an apartment with the lease-holder, with whom the entire living area is shared. The Roommate Law contemplates that the occupant resides in the apartment together with the tenant.

A guest is someone who has temporarily received and entertained at one’s home, but who is not a regular occupant. The Brooks case goes on to define a guest as someone:

Moreover, your Airbnb guests are not your “roommates.” If you are interested in this topic, consider taking the Tenant Learning Platform class, “How to Do Airbnb Legally in Your Apartment”. See Goldstein v. Lipetz, 150 A.D.3d 562 (1st Dep’t 2017) (Initially, we are unanimous in rejecting defendant’s primary argument on this appeal, in which she contends that the 93 transient, short-term, paying guests she hosted over a year and a half were “roommates” within the purview of Real Property Law § 235–f and RSC 2525.7. Contrary to the view of Supreme Court, the record establishes that defendant’s “guests” were, as a matter of law, subtenants, and this matter is therefore governed by RSC 2525. 6…”)

Finally, subtenants are not roommates. If you, as the only tenant on the lease, have moved out of your apartment and left a “roommate” there, then your roommate is not a roommate, but a subtenant. See Offit, Fortgang & Komito v. Moshlak, 5 Misc.3d 130(A) (App. T. 1st Dep’t 2004) (“Significantly, tenant conceded at his deposition that he does not concurrently reside in the subject premises with his two “roommates,” spends the bulk of his time at his wife’s two bedroom apartment on East 14th Street and never obtained landlord’s written consent for the sublet.”) A tenant’s right to a sub-tenant is a whole other topic, and we’ll cover it soon, so check in before you list your place on craigslist.